The answer is no but I’ll clarify that later.

The big news is why we’re not hearing what was really said at Thursday’s briefing.

Dr. Willam Bryan gave a presentation about research done by the Department of Homeland Security. They found that, and this is important in light of stay-at-home orders and public parks being closed, that Covid-19 “survives best in indoor and dry conditions” and “dies the quickest in the presence of direct sunlight.” 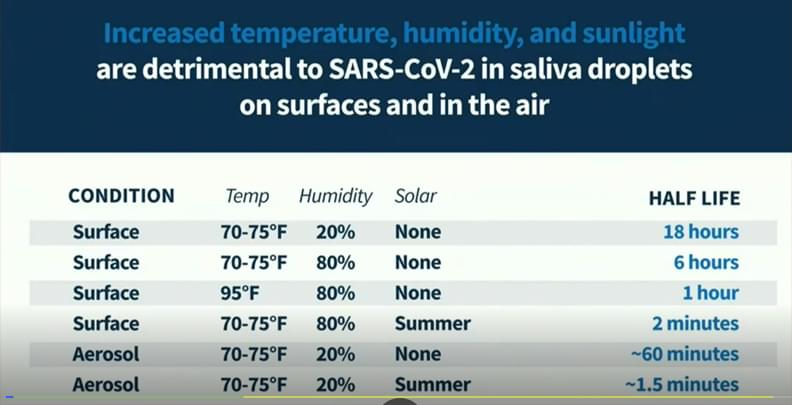 Their research has found that the virus struggles to survive when temperature and humidity are increased. Ultraviolet light had a drastic impact, reducing the virus’ half-life (or rate of decay) was reduced from 18 hours to 90 seconds!!!

Dr. Bryan also said that they tested the impact that disinfectants had on the virus. He said bleach killed the virus in FIVE minutes with no manipulation (wiping, mopping, etc.). Isopropyl alcohol (hand sanitizer) killed it in 30 seconds with no manipulation. You can watch the entire presentation below

This should be the headline. This could be a huge breakthrough. Instead we got this: 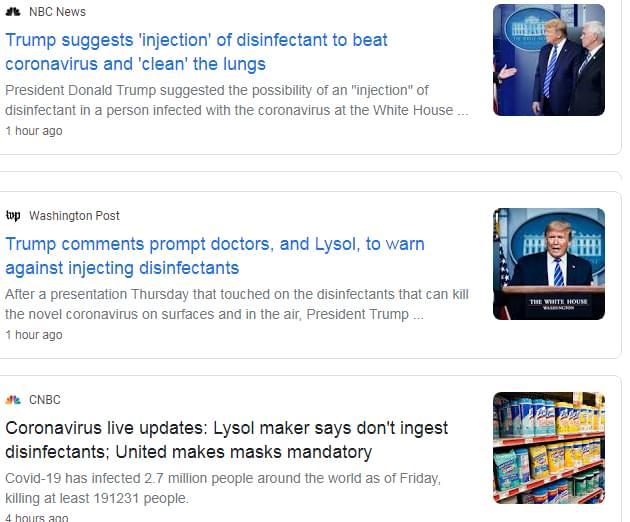 I went back and watched the entire briefing. You can watch the clip below but I was very careful to quote the President verbatim. Here’s what he said after the presentation:

Now remember there were two parts of the presentation. One about heat and humidity and sunlight (which seems very relevant with summer just around the corner in the northern hemisphere). The other had to do with cleaning of surfaces with household items like bleach and alcohol. The President then said this:

“And then I see the disinfectant, where it knocks it out in a minute, one minute, and is there a way we can do something like that by injection inside (using a wiping motion) or almost a cleaning as you see it gets in the lungs and it does a tremendous number so it’d be interesting to check that.”

He’s talking about how a cleaning agent could be used to kill the virus (something they did with mass transit in China and South Korea).

Was inject the right verb to use? Maybe not. Would application have been more appropriate to use than injection? Perhaps, but I don’t think the context was lost on anyone who was watching or the press that was in attendance.

Which brings me back to the original point. Why would those in attendance choose NOT to report on a potential game-changer in terms of how communicable the virus will be in the warmer months and the relatively simple ways that everyday Americans can protect their families?

Isn’t that the story that should be told? Wouldn’t that information be beneficial to families who are struggling financially because they’ve lost their jobs due to the government shutting down the economy?

The first question had NOTHING to do with Dr. Bryan’s presentation. It was as about bailouts and states declaring bankruptcy. It’s almost like they didn’t care about what they just heard. Why would that be the case? I’ll let you decide for yourself but I think I already know the answer.

Chad Young is the host of The Morning Show on Talk 104/93 WKCT. You can find out more information on his bio page.