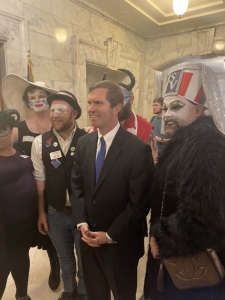 FRANKFORT — Gov. Andy Beshear spoke at an LGBTQ-rights rally in the Capitol on Wednesday, advocating for a statewide fairness law and a bill banning “conversion therapy.”

“Kentucky cannot reach its full potential if all of our people don’t feel supported to be themselves,” Beshear said. “Discrimination against our LGBTQ brothers and sisters is absolutely unacceptable in this commonwealth.”

The rally, held by the Louisville-based Fairness Campaign every legislative session, featured activists and legislators advocating for those bills and against a slew of bills targeting transgender youth.

Addressing the crowd in the Capitol Rotunda, Beshear said: “I’m proud to be the first sitting governor to attend this fairness rally.”

Beshear threw his support behind legislation banning discrimination in employment, housing and public accommodations on the basis of sexual orientation or gender identity, which has failed to pass either chamber in each legislative session over the past decade.